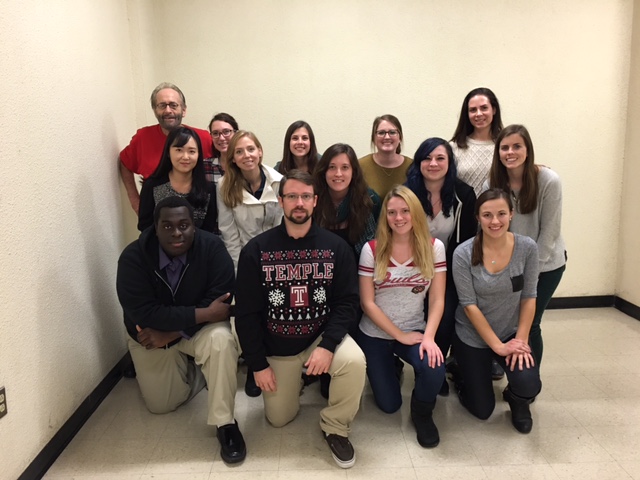 Starting back row at left with Frank Farley, other authors are listed alphabetically; Michelle Beech absent

This review considers a book and a public media and educational event concerning that book. Thrive was the basis of the public event and the discussions there about how better mental health care and certain approaches to the treatment and prevention of mental illness can facilitate the thriving of individuals.  The authors are distinguished British scholars Lord Richard Layard, an economist and member of the British House of Lords, and David M. Clark, a British psychologist, who Martin Seligman introduced at the public event as the world’s leading clinical psychologist!  The public event was held in Philadelphia on September 30, 2015, and involved the book’s two authors as well as Martin Seligman, Aaron T. Beck and his daughter Judith Beck. This amazing gathering of leading scholars to discuss this recent book was attended by a large audience including the authors of this review (a graduate class of the first author).  The present review emerged from the public forum and a reading of the book.

Did this book warrant the hoopla? Our answer is yes.  (We note that the Foreword was written by Nobelist Daniel Kahneman!)  This volume is one of the clearest expositions on the state of mental health and illness currently available.  It is a call to action, a presenting in understandable language the extent of mental illness, the human tragedy it causes, its economic and social costs and consequences, and successful means of treating it.  The book outlines the powerful positive health consequences of treating mental illness and the low costs of doing so.  Although the system of mental health care introduced in this book has features that are seen in many approaches to treatment, the Layard and Clark model is exceptionally comprehensive, with ongoing monitoring of interventions and outcomes, and with implementation employed throughout Britain so success can be monitored across a variety of local conditions.  A constant concern is the debilitating effects of mental illness, with approximately 50% of all pain and suffering globally being mental pain and mental suffering. Treatment with psychotherapy can be inexpensive, with few side effects, and with long-lasting improvement and success.  The role of public policy is emphasized.  Their bold approach for improved, accessible and un-stigmatized mental health-care, extensively tested in Britain, should be given a thorough vetting in the American context.  Their model is termed “Improving Access to Psychological Therapies,” an evidence-based approach to thriving rather then suffering, with the necessary steps to accomplish this being outlined.  Despite the unexceptional title to their model, their reported success with it is impressive!

In 16 chapters the global state of mental health is presented, and effective therapies, especially Cognitive Behavior Therapy (CBT), are noted. The authors state “Mental ill health explains more of the misery in the population than physical illness does” (p. 66).  The book does an impressive job expressing how a healthy mind and healthy body are linked.  It provides a detailed look into the combined genetic and environmental factors that pose a risk for mental illness.  In discussing the causes of mental illness, a foundation for effectively balancing prevention and treatment is provided.  This work should be helpful in assisting policy makers as well as practitioners in serving the needs of mentally ill populations.  Layard and Clark lay out a strong case that the broader society heavily influences diagnosis, treatment and outcome.

The first section of the book defines the problems of mental illness; what it is; how many suffer from it; what kind of help they are getting; how it affects people’s lives including families and others; and what are the economic costs of mental illness. This section concludes with the question—what causes mental illness?  The authors conclude, correctly, that the causes are usually multiple.  There are several ingredients in the causal recipe.

The second and final section of the book addresses the question of psychotherapy effectiveness (yes, it can be very effective); how therapies are developed; what works for whom; can society afford economically to expand access to therapy (yes); how can we improve access; what approaches work best for young people; can mental illness be prevented obviating the need for therapy, treatment or intervention; would improvements in the general culture help; and finally, an impassioned plea is made to “Stop This Pain”—to get the proven psychological treatments to the people who need them and aren’t getting them. We note that the authors tend to favor CBT especially in regard to depression and anxiety, which is entirely reasonable, but a better sense of the effectiveness of at least some other methods might have been helpful. Recent research clearly establishes the therapeutic alliance as a significant factor no matter the method, and this might also have been considered more.

Future generations will be amazed at how blind we were. They will also be amazed that we were so cruel. When we look back at earlier generations, we are shocked by how we treated slaves, or woman and children in the mines, or people with physical disabilities. Our successors will be amazed at how we treat people today who are mentally ill—how we routinely ignore their desperate pleas for psychological support. (p.265)

Daniel Kahneman notes in the Foreword “…the social costs of mental illness are terribly high and the costs of effective treatments are surprisingly low. ”

This book is a passionate manifesto for a thriving mental health over debilitating mental illness, and how to get there.