SHE REPLIED: “Look Across the Breakfast Table” …

In reel film life Bridget Jones’s Baby, (BJB) 40-something Bridget’s fruitless musings confabulate “body” with “baby.” In real life, at an on-going Kansas City Sunday brunch group, our 40-something friend Isaac sings lamenting lyrics from his song “I Fall Away:” “Our lives are so much smaller than they taught us they would be.”  But wait,…. I, the sole female in our otherwise all male chorus, echo agreement, just like Bridget endlessly does with her inexhaustible existential soul search in this third movie of her eponymous series. He said ….. she replied ….

But wait,…. Bridget and I differ as heroines. She does not reply when the men in her life face existential black holes. Different purposes preoccupy Bridget and Isaac (and me)—not just because the former is fiction and the latter alive.

Isaac worries about “making a mark.” His is the heroic quest of everyman, according to the Jungian premise of Hero with a Thousand Faces (https://www.amazon.com/Thousand-Faces-Collected-Joseph-Campbell/d). A different quest preoccupies Bridget—it gives destiny to another human being while Isaac yearns for his own destiny.  The BJB males quest, like Isaac, to “make their mark”—Mark Darcy excels as a barrister and Jack Qwant as a dating guru.  In modernity while Isaac/Mark/Jack ponder eternity, Bridget ponders maternity. “To be, or not to be … pregnant?”

Social cacophony touts gender equity, but women and men differ in fundamental ways. Is Freud right universally? Is anatomy really destiny?  Where is anthropologist Margaret Mead and her cultural relativism when we need them?  Do men have choices for giving life meaning while women’s only choice is giving life?  What about those women choosing not to have children?  If women desert biology, do they need to invent a heroic quest for meaning?  Do we become more like men psychologically?  Does a chosen cultural role, and not biological being, determine destiny? Was Freud wrong—nurture rules?  Or, right—nature rules—unless we control nature? But wait, …. isn’t that nurture?

This conundrum resembles a black hole, siphoning us toward depths with no visible bottom. Why not turn to BJB as a cinematic mirror (https://www.amazon.com/Cinematic-Mirror-Psychology-Life-Coaching/) reflecting the “quest”ioning for the meaning of life. But wait, …. perhaps this “quest”ion misses the “mark.”

Since undergraduate days when I studied women’s/men’s places in American society, I began cautioning against “false” feminism. “True” feminism does not permit women to become like men, valuing work highest. Such false feminism only “frees” women to work like men. But wait, …. that’s “masculism,” isn’t it?

But wait, …. as Bridget might ask quizzically, “Just what is “true” feminism?” In 1995, I advised on the design of this brochure cover for our shared clinical practice: 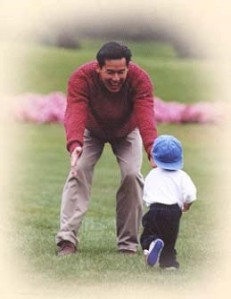 BJB shows “true” feminism. Both Jack and Mark embrace, even vie over, the role of father. They value relatedness to the unborn child. As Bridget would interject, “but wait,”…..that is only the first step toward “true” feminism. Fatherhood is a breeze compared to a longer stride rarely taken.

Men’s other foot as “husband/partner” still sticks too often in sexist muck. But wait,…. relatedness to Bridget is more than just sex……… in this series’ first flick Bridget Jones’s Diary (Maguire, 2001), Mark likes her “just as she is.” Fast forward decades later to BJB. Now Mark’s fealty to Bridget arises mainly when she bears their, er, his child. Procreative sex rules over recreational sex, even though both Mark and Jack started up with Bridget as mating fun.

“But wait…,” Bridget would “discover” this thought—today, wives often do not need husbands to provide. Men no longer own wives/partners as property or fuse with wives as simple extensions.  The basis for their relatedness transforms from necessity to proclivity.

If wives are not husbands’ property or their extensions, what is their relationship? If so, how to keep their wives attached? BJB intimates men need to “join” their wives. Communications specialist Deborah Tannen (https://www.amazon.com/Just-Dont-Understand-Women-Conversation/) provides clues on how to do so. Why?

Bottom line, men still live to work rather than work to live. In Jungian terms, the role of provider fuses with men’s self. Millennials—males and females—may be getting it right—many work to live.

In BJB, at least both Mark and Jack value Bridget when she incubates a child—whoever the daddy is.  But wait,…..their appreciation for her—just as she is—is questionable given their quick exits whenever the smallest barriers appear.  Bridget herself seems only to let them near when she is enceinte. Being with babe appears a magic draught of intimacy for all.  That, perhaps, is the baby’s greatest gift to surrounding adults. Babies let another being pierce her or his own narcissism. Relatedness rules!

Mimicking Bridget, my absolute most challenging role ever is that of wife. Nothing is more meaningful than committing to, caring for, and taking care of another adult. Every day new husband-challenges confront me. The achievement of adults growing old together I call “hitting that long home run.” We trot double time together in lockstep around the bases of life.

Isaacs of the world, try looking there for deep inner meaning. Isaac’s quest to make a meaningful mark in life would evaporate in the efforts and challenge of “now.”  Men of America, “making your mark” sits across the breakfast table from you.  That is “true” feminism.

But wait, …. even the glow of inner fulfillment needs someone to buy the bacon, or else our breakfast table has slim pickin’s.